All the laughs that made it a classic are still there in this iPhone version of The Secret of Monkey Island: Special Edition ($7.99). And that’s ultimately why players should revisit the game and why we give it our recommendation. But grab a walkthrough, because its interface wasn’t ported well. The ill-designed touch-cursor system replaces mouse and keyboard and slows the game way down. And the iPhone’s tiny screen makes discovering the game’s innumerable tiny hidden objects a joyless task. But once you get the general idea of what to do, Secret of Monkey Island plays out like the world’s funniest interactive comic book, and you’ll enjoy nearly every moment.

I had never played Secret of Monkey Island until this version (I was a Maniac Mansion kid myself) but knew of it via word of mouth. Still, I was caught off guard by how funny the game is. Most surprising was the great voice acting. Already working with a great script, the actors deliver the lines in a way that wrings out every last drop of comedy. The graphics, music, and sound effects are likewise professionally done.

But the puzzle game part of this point-and-click adventure is not quite up to snuff. The iPhone version’s touch cursor fails to adequately replace keyboard and mouse, and the iPhone’s small screen causes you to squint to see the small objects that you are required to collect for most of the quests. Trying to solve the puzzles without help quickly became frustrating because of the interface flaws. 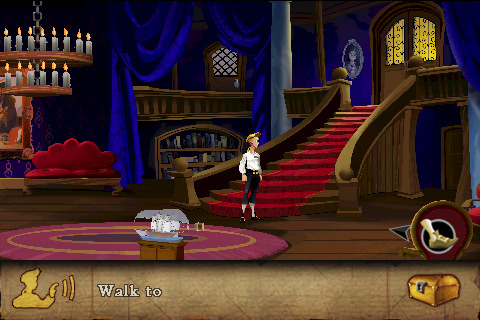 But once I grabbed a walkthrough, the real reason why Monkey Island became a classic floated to the surface. It’s all about the story and the comedy. That the story unwraps itself with so many funny surprises is what ultimately pulls you along. It’s difficult to see why you’d buy a game just to walk through it, but trying the lite version may help explain why.

The Secret of Monkey Island: Special Edition is a classic game that must be experienced at least once. Due to interface problems, you might be better off playing it on a different platform, but the iPhone version ultimately delivers the goods, and we can recommended it. 7.9 out of 10, recommended.