Ready for some déjà vu? In a strange repeat of a similar incident last year, Apple has contacted police concerning a lost iPhone prototype that went missing from their possession in a San Francisco bar in July, according to CNET. The prototype iPhone was in the possession of an Apple employee prior to its disappearance at a Mexican bar and restaurant called Cava 22 in San Francisco’s Mission district.

CNET reports that the whereabouts of the iPhone prototype are still unknown, but claims it may have been sold on Craigslist for $200. They offer no further details on the Craigslist sale, however, so it’s unknown what leads them to suspect it was sold on the popular online classifieds site.

Immediately after the prototype went missing in the bar, Apple tracked the iPhone to a two-story house in the Bernal Heights neighborhood. Apple then contacted San Francisco police, explaining they were “desperate” to have the phone returned and said it was “priceless,” according to a source.

Police then, along with Apple investigators, visited the Bernal Heights home and spoke with a twentysomething man who confirmed he was at Cava 22 the same night as the prototype iPhone went missing. The man denied knowing anything about the phone, however. Police then received permission from the man to search the house. Police found nothing.

Next, Apple investigators offered the young man money for the prototype, promising no questions or charges, but the young man reiterated that he knew nothing of the phone.

The incident is eerily similar to an incident last year when Apple employee Gray Powell lost an iPhone 4 prototype in a German bar in California. The prototype was later sold to website Gizmodo, who took apart the phone and published images of it on their website. Two men not affiliated with Gizmodo were later charged with misdemeanors in the incident.

As far as the iPhone 5 is concerned, this isn’t even the first (or second) purported sighting of the next-gen device in a California bar this year.

In June, we reported on a story told by tech host Leo Laporte on his MacBreak Weekly podcast. He spoke of an account of a possible iPhone 5 sighting in a Silicon Valley bar. The person who spotted the prototype snapped photos of the device, then showed them to Mr. Laporte, who described the device as “slightly curved” and looking slightly like a Nexus S Android phone. Mr. Laporte’s recounting of the iPhone 5 prototype story can be viewed in the YouTube video below beginning around 48 min, 33 sec:

Another dubious “iPhone 5” prototype sighting occurred one month later in July—coincidentally, about the same time today’s report claims Apple’s prototype went missing—only this time the spotter managed to snap a spy shot. That photo can be seen below. The photo shows a device that some claim may be a prototype device due to its flat back, round corners, and thin profile. To us, it resembles an iPhone 3GS.

It should be noted, however, that while Apple does put prototype iPhones through real-world testing in public places, the prototypes are usually disguised and wouldn’t be recognizable as a “next-gen” device. For example, the Gizmodo iPhone was hidden in a case that made it look like an iPhone 3GS. An image of that iPhone 4 hidden inside its “3GS” casing can be seen below, courtesy of Gizmodo: 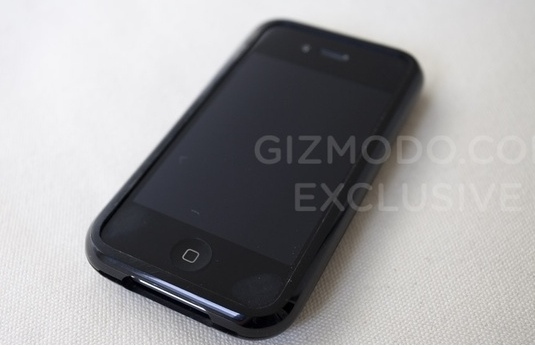 CNET doesn’t offer any updated information on the recent missing prototype other than the recounting of the events that occurred in July. It’s possible that the device is still missing, or Apple investigators could have tracked its trail through the supposed Craigslist sale and had it safely returned. Whatever happened, Apple is unlikely to update us.